The water dripped sullenly off my jacket, creating audible “plops” as the droplets hit the polished wooden floor, where they co-operatively coalesced into a minor puddle.

I smiled at the barista, as she cheerfully passed my coffee across to me, proudly announcing “Caffe Latte Medio”, as if she were conferring a knighthood upon me.

I walked to an empty corner table, and sat down, shoving my rucksack into the corner.

Pulling my battered laptop computer out of its cover, I set up; the battery was full, my mug was full, and so I settled down.

I have had a life-long interest – a passion for aviation that has spanned fifty years. My early schoolboy heroes were the wartime pilots from both the Great War, and World War Two. In my teens, the trailblazing pilots of the 1920s and 1930s caught my imagination, and I read almost everything about the early fliers that I could lay my hands on.

By the age of thirteen or fourteen, I was familiar with the great pioneers – Amy Johnson, Amelia Earhart, Jean Batten, Sir Alan Cobham, Neville Norway, Elrey Jeppesen and Wiley Post.

Over the years, I became familiar with the names of hero pilots, Al Haynes, and his flight deck colleagues who heroically flew their stricken DC-10 jet to its infamous crash landing at Sioux City.

Captain Bob Pearson and First Officer Maurice Quintal whose aircraft ran out of fuel over the wastes of the Canadian prairies, and who successfully glided to a safe landing at Gimli, a former Royal Canadian Air Force base.

More recently Captain Chesley Sullenberger was hailed a hero after ditching his fully laden Airbus A320 into the River Hudson after a bird strike critically damaged both of its engines shortly after take-off.

All these accounts tend to stick in the minds of the public, due to the courage and swift decision making of the flight crew.

Little is said about their cabin crew colleagues, despite many of them having been instrumental in saving lives – and sometimes dying in the course of their duties, and the spotlight tends to focus on the pilots.

This imbalance is probably not deliberate, but needs to be corrected, so after a little digging around, I found some accounts of very brave and courageous cabin crew.

Take the case of Barbara Harrison. She joined British Overseas Airways Corporation in May 1966, at the age of twenty one as a Flight Attendant (or Air Stewardess as they were known at the time). 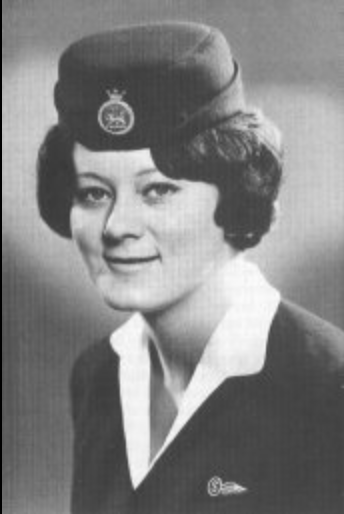 On the 8th April 1968 she was rostered to operate BOAC’s Flight 712WE to Sydney. This long-haul flight was flown by a Boeing 707 –  long and tiring, routing via Zurich, Tel Aviv, Tehran, Mumbai, Singapore and Perth.

Sadly, the flight was doomed from the start. It departed Heathrow Airport at about three thirty in the afternoon. During the initial climb out, the number two engine caught fire, and was so severely damaged that it fell from the aircraft, leaving the rest of the left wing ablaze.

The flight made an immediate emergency return back to Heathrow, where it made a safe landing. However, the fire on the port wing intensified to the point that the cabin windows were actually melting. Once the stricken aircraft touched down, the situation was so dire, that the cabin crew were beginning to start an immediate passenger evacuation.

Barbara’s crew position was at the rear of the aircraft, and her emergency duties were to assist the cabin attendant at the aft crew station in opening the appropriate passenger door, and help to inflate the escape slide, and then subsequently direct passengers to the door to make their escape.

The pair eventually managed to open the rear starboard door, furthest from the fire and fired the escape slide, however, during the deployment, the slide twisted, making it useless. Bravely, the steward climbed down the slide, and straightened it, leaving Barbara in the cabin to organise the evacuation.

She then moved to the port rear door, which was extremely close to the blazing left wing, but she still managed to evacuate a further five passengers before that slide was damaged by the intensity of the fire, and deflated.

21 year old Barbara Harrison was last seen in the doorway, looking as if she were preparing to jump.

She disappeared back into the blazing cabin in a desperate attempt to save the four remaining passengers – including a disabled woman and an eight year old girl.

She was never seen alive again.

She was posthumously awarded the George Cross in recognition of her selfless gallantry that day – the only woman to have ever received the award in peacetime, and the youngest woman ever to hold the George Cross. 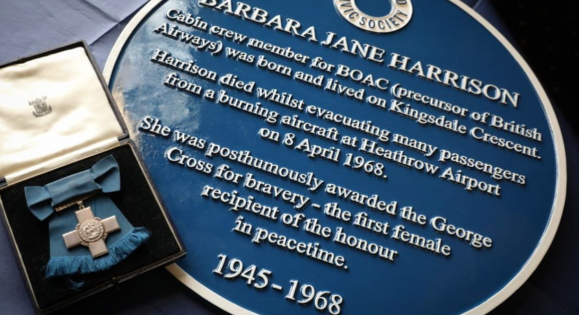 Digging a bit further, I found out about Neerja Bhanot.

Neerja was a senior Cabin Attendant working with Pan American Airlines. She was just twenty-three when she was rostered to operate Pan Am Flight 73, scheduled to fly from Mumbai to New York on the 5th September 1986[1].

The flight was to be operated by a Boeing 747-100 series aircraft, and departed from Chatrapati Shivaji Maharaj International carrying 394 passengers, 9 infants, and 13 Indian cabin crew.

Flight 73 was planned to land twice before getting to New York, with stops at Karachi, Pakistan, and Frankfurt in West Germany.

Arriving at Karachi at 04:30, Flight 73 had disembarked over a hundred passengers, and was in the process of boarding the first busload of passengers for the next leg of the trip, when the aircraft was violently taken over by four Palestinian hijackers.

The Hijackers identified themselves as belonging to the Abu Nidal terrorist group.

This escalated the tension, and a passenger was arbitrarily selected, and taken to the forward aircraft door, where he was brutally murdered – shot in the back of the head, and thrown onto the tarmac from the aircraft door.

As the Senior Purser on board, Neeraj maintained her professionalism, and kept the passengers calm in an effort to stabilise the situation.

She was ordered to collect all of the passenger passports, and give them to the lead hijacker.

Realising that holders of US passports would be at the highest risk, she briefed her colleagues to hide as many of the US passports as possible, and many were hidden under seats, and the rest thrown down a galley refuse chute.

Realising the situation could only get worse, Neerja removed the page detailing how to open an aircraft door from her cabin crew manual, and slipped it into a magazine. Passing down the cabin, she passed this to a male passenger sitting adjacent to the door, instructing him to read the magazine carefully and to refer to it again later if needed. The page contained full instructions on how to open the door safely, and how to deploy the evacuation slide.

As the hijack progressed, The aircraft ran out of fuel, resulting in the aircraft’s Auxiliary Power Unit (APU) shutting down.

The aircraft was now only lit with the emergency lights, and this obviously unnerved one of the gunmen standing by the forward aircraft door, who opened fire in the darkness, aiming at the suicide vest worn by another of the terrorists.

The shot was inaccurate, and the desired explosion didn’t happen, but the sudden gunfire acted as a catalyst, causing the remaining gunmen to detonate explosives and open fire indiscriminately in the passenger cabin injuring and killing many of those on board.

Neeraj bravely opened doors, and assisted passengers in making their escape. Shot in the hip, and bleeding heavily, she was eventually evacuated to the local hospital, where she died of her wounds. 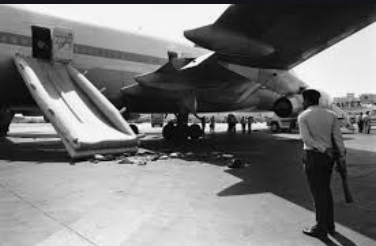 Stories on the internet suggest that she was shot whilst shielding three children, one of whom was so inspired that he learned to fly, and subsequently became a captain with a major air carrier, although I have found no corroborative evidence for this, not even in documented interviews with the crew.

There is no doubt in my mind though, that Neeraj saved many lives with her selfless actions that terrible day in 1986.

More recently, on the 5th May 2019, Aeroflot Flight 1492 left Moscow’s Sheremetyevo Airport bound for Murmansk. Shortly after take-off, the Sukhoi Superjet was hit by lightning, sustaining damage to its fly-by-wire flight controls, autopilot and radios.

It returned to Moscow, where it made an emergency landing. During the landing, it bounced heavily, and burst into flames.

Twenty-two year old Maxim Moiseev was positioned in the aft section of the cabin, where the intense fire struck first. Unable to open his exit door, he directed his passengers forwards, but died quickly in his valiant efforts to assist his passengers. 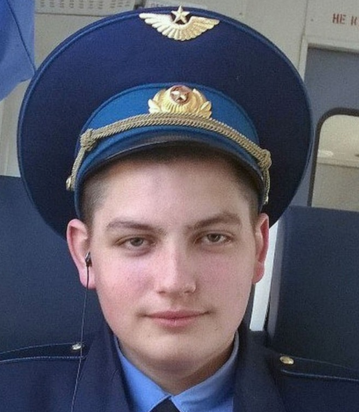 His colleague, Tatyana Kasatkina stationed in the forward part of the fuselage managed to kick her door open, and forcibly ejected passengers down the escape slide, saving many lives as she did so. This was conducted whilst the cabin was filling with pungent, acrid smoke, and with intense fire. Temperatures in the cabin were so high that windows were melting.

In all of these cases, many passengers only survived as a result of the courage, selfless bravery and cool thinking of their cabin crew.

Call them what you will – Flight Attendants, Cabin Crew, Stewards and Stewardesses, they have as much to be proud of in an emergency as their flight deck colleagues.

Next time you fly, show a little respect for the “hostie” or “trolley dolly” that is serving your meal, or bringing you another Gin and Tonic. Behind the uniform, or the make-up and smile, there will be a brave, highly trained and caring person – who could be the difference between life and death in an emergency.

Draining the last of my coffee, I closed the lid of my laptop, the article finished.

The result is here on my page.

By The Flying Wordsmith

A highly qualified aviation professional who is able to write cogent and professional articles on a wide variety of subjects. Also interested in general articles covering travel, politics, social commentary and prose. Poetry and Lyrics also an interest.

This site uses Akismet to reduce spam. Learn how your comment data is processed.